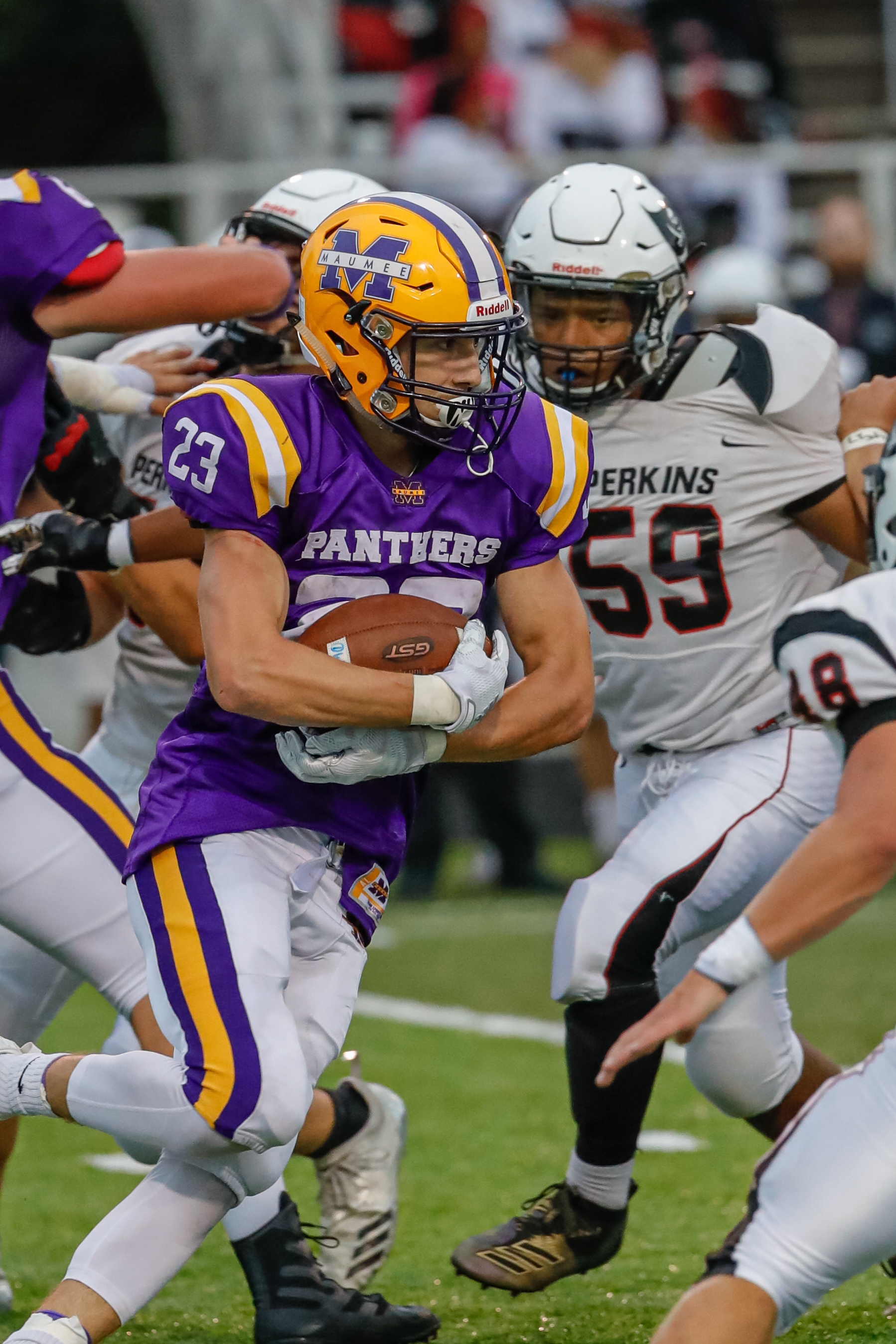 If the old coaching adage of teams showing the most improvement from Week 1 to Week 2 holds true, the Maumee football team could have better days just over the horizon.

The Panthers put together a much more complete and competitive effort Friday night against Sandusky Perkins, falling 42-35 in overtime on Chapman Field at Kazmaier Stadium.

A week after suffering a 49-7 loss to Clay to open the season, an encouraging performance against the Pirates proved Week 1’s lopsided loss wouldn’t be the norm this season for the Panthers (0-2).

The first Maumee score came midway through the first quarter as Jaelin McCoy picked off Perkins quarterback Christopher Campbell and returned the ball 87 yards up the home sideline before fumbling. Thankfully for the Panthers, teammate Noah Fowls scooped up the loose ball and ran the final 11 yards for the score.

After Maumee forced a turnover on downs deep in their own territory on the next possession, McCoy was again off to the races on the Panthers first play from scrimmage, taking a short pass from Marvin and racing up the middle of the field for a 97-yard scoring play.

Perkins answered to tie the game at 14-14 with Campbell’s first of three rushing touchdowns on the night. He finished with 216 yards on 31 carries, the second straight week an opposing quarterback has torched the Maumee defense for big rushing yards.

“Hopefully, we’ll figure it because other teams will see it, too,” Maumee senior Caden Brookshier said. “We’ll figure it out and end up stopping it soon enough.”

Later in the second quarter, Brookshier put the Panthers back on top with a 4-yard rush, capping off a drive highlighted by Marvin’s 34-yard completion to Derek Marvin.

But Perkins chewed up the final 4 minutes, 16 seconds of the first half with a 15-play scoring drive, and the Pirates took a one-point lead into the break.

The two squads traded touchdowns in the third quarter, including Zach Marvin’s 3-yard pass to Brookshier to cut the Perkins lead to 28-27. Marvin went 3-for-3 for 51 yards on the drive, including a 41-yard completion to Brookshier.

For the game, Marvin threw for 251 yards and three touchdowns on 17-of-25 passing, adding a team-best 58 yards on the ground. Brookshier caught 10 passes for 80 yards and a pair of TDs.

“Our kids are getting better at running what we’re doing,” Coutcher said of the new spread offense. “We saw a huge improvement in the way we’re running to the ball on defense, too, and the confidence that we’re playing a little faster on offense. We just need to keep our guys healthy and hungry.”

The Pirates (1-1) took an eight-point lead on the fourth play of the fourth quarter, but the Panthers answered with their longest scoring drive of the night, a 12-play march over 63 yards that ended when Marvin and Brookshier hooked up on a 7-yard scoring pass. Marvin found Derek Marvin on the 2-point conversion, knotting the score at 35-35 with 6:26 left in the game.

Neither team threatened the end zone for the rest of regulation, sending the game into overtime.

Perkins took the ball first, and the Panthers defense stymied the Pirates on the first three plays, forcing an incompletion, a rush for no gain, and a rush for two yards. But on fourth down, Campbell found Trenton McInwe for an 18-yard touchdown pass and a 42-35 lead.

“Defensively, I didn’t see us quit at all,” Coutcher said. “In the overtime, their kid made a great play, and we were right in position. I told our guys one play doesn’t define us or make or break the game.”

The Panthers took possession and didn’t cross the 20-yard line, rushing on first down and throwing passes — with two incompletions — on the final three plays.

Penalties plagued the Panthers, who were whistled for seven flags and 126 yards.

Maumee returns to action Friday in its first road game of the season, at Eastwood High School.

“This is a statement thing tonight, in that we’re right there, we’re so close,” Coutcher said.

NLL Championships
10:00 am
View All Events