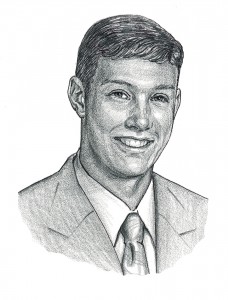 Cameron Coutcher attended Maumee High School from 1993-1997. Throughout that time, he participated, and excelled, at football and baseball.

As a football player, Cameron earned two varsity letters and started on both sides of the ball and special teams for two years. He was an Honorable Mention All-NLL selection at defensive back as a junior. His senior year, he was named First-Team All NLL as a wide receiver and Second-Team All-NLL as a defensive back. His teammates and coaches voted him tri-captain of the team, and he was also awarded Most Valuable Player. Coaches in the Northwest District also named him Honorable Mention All-Northwest Ohio; he earned a nod to play in the Regional All-Star Game, and The Toledo Blade named Coutcher First-Team All-Blade. Cameron was also part of the 1994 NLL Championship and OHSAA Division II state playoff team as a sophomore.

During his time on the diamond, Coutcher earned two varsity letters. He was recognized as a Second-Team All-NLL and Second-Team All-Blade outfielder as a junior. He also earned First-Team All-NLL honors as a catcher his senior season along with Honorable Mention All-Northwest Ohio. Cameron was selected to play in the Northwest Ohio All-Star baseball game and was named First-Team All-Blade. Coutcher saw playing time on the 1995 NLL Championship team as a sophomore.

Cameron went on to play football for one year and started on the baseball team for four years at Defiance College, where he had an outstanding career. Coutcher’s name can still be found in the record books in many offensive categories, and he was named Second-Team All-Heartland Conference designated hitter as a sophomore (MVP of the team) and First-Team All-MIAA as a senior outfielder.

Cameron’s dedication to Maumee City Schools did not stop when he graduated in 1997. He is currently in his 16th year as an educator and coach in the Maumee City School District where he has given his time and effort to coaching and mentoring young men in baseball as the head coach for 15 seasons and in different capacities in football for 16 seasons. 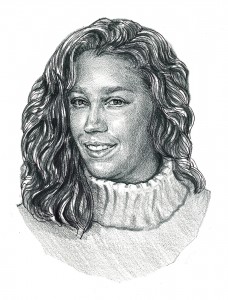 Amanda attended Maumee High School from 1988-1992. Upon graduating, Amanda earned 10 varsity letters: 3 earned in volleyball, 3 in basketball, 4 in softball.  In three years of varsity volleyball, Amanda was on an All-Northern Lakes League team three years: 1st Team her sophomore and junior years and Honorable Mention her senior year.  She was 2nd Team All-District her sophomore year and 1st Team her junior year for volleyball.  Her junior year also included Special Mention on the All-Metro volleyball team and the Toledo Blade Athletic Award. She was also chosen by her teammates to be the team MVP and won the coaches award.

In addition, Amanda was on 7 NLL Championship teams in her career; two in volleyball, two in basketball and three in softball.  Amanda attended Notre Dame College of Ohio on a softball and volleyball scholarship. 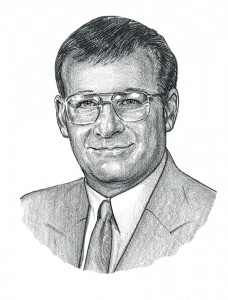 Respect and dedication are the two terms synonymous with Jim Cellio’s career in education. He has earned the respect, not only of the students, teachers, and residents of Maumee City Schools, but also of his fellow educators in northwest Ohio.

Jim excelled as a teacher and coach for 17 years. He was a longtime assistant football coach, as well as a track coach. He left such an impression on his students and athletes that they continue to keep in touch with and speak highly of him to this day.

Jim continued his dedication to students when he became Maumee High School Principal in 1994. He supported all activities, clubs, and sports programs equally. He was the greatest student advocate throughout his career and students respected him for that.

The dedication that Jim exhibited extended beyond the school building. Jim was a member of the Maumee Schools Foundation, the Central Catholic High School Board of Regents, the St. Vincent DePaul Society, and Habitat for Humanity.  He also spoke at Engaged Couples Seminars at St. Rose in Perrysburg.

After retirement, Jim continued to dedicate himself to the field of education. He worked for Bowling Green State University as a Mentor for Student Teachers and Field Experience students. He was coaxed out of retirement to help Maumee City Schools when the district needed a substitute principal at Ft. Miami, a substitute biology teacher at the high school, and a Director of Curriculum in the Administrative Office.

A career like Jim’s did not go unnoticed by his peers. He received the Ohio Department of Education Administrator Recognition & Award for Special Education in 1999 and the Golden Apple Award in 2004. He was a finalist for the Ohio High School Principal of the Year Award in 2004 and was Bowling Green State University Mentor of the Year in 2009.

Jim is not an alumnus of the Maumee School District, but he bleeds purple and gold just like anyone who did graduate from Maumee. His accomplishments as a teacher, coach, and administrator leave a lasting impression on all who know him. He is rightfully deserving of a place in the Maumee High School Hall of Excellence and Contribution. 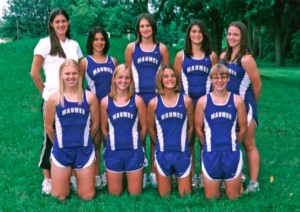 The 2005 Maumee High School women’s cross country squad will be known by its fans and followers for its character, perseverance, toughness and resiliency, but most of all it will be known for being the Division II sixth-best team in the state of Ohio.

It was because the ladies possessed these traits that they were able to accomplish the goals they had set for the team that season.  The ladies showed their determination by winning both the Norm Bray and the Springfield Invitationals, and continued to display their stamina and grit by finishing in the top four of four other invitational meets.  The Panthers also ran with passion and heart in their dual meets where they accumulated a noteworthy 6-2 mark.  The team displayed their depth and heart in finishing second in the balanced and talented Northern Lakes League meet and used the confidence they gained in that success to capture the District meet, which was held at Terra Technical College in Fremont.  The challenge was now before them as the ladies competed in the Regionals held in Tiffin.  Having to be one of the top four squads to earn a trip to the state meet, the Panthers clawed their way to a second place finish and a trip to Columbus.  It was at Scioto Downs Racetrack where the Angie Gugger-coached squad displayed the grit, perseverance and determination, gained by competing through a grueling schedule, and they ran their way to a sixth- place finish in Ohio’s Division II Cross Country meet.  This tremendous accomplishment has yet to be attained by any cross country team from Maumee High School.

The 2005 women’s cross country team was a group of individuals which embodied all of the virtues necessary to construct a successful athletic program.  They were hard working, resilient, tough and selfless in the pursuit of their goals, and their character and determination were the keys on which their success was built.   That dedication and commitment to themselves, their coach, and each other, is why the 2005 women’s cross country team deserves to be remembered.