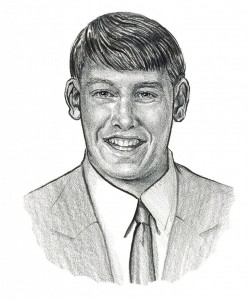 James Scott Harding was a larger-than-life figure at Maumee High School from 1992-1996, where he earned six varsity letters.  Two letters were achieved in football and basketball, as well as one each in track and baseball.

Jim was elected captain his senior season in both basketball and baseball.  His senior year in basketball (1995-96), he was chosen First Team NLL, as well as First Team All-District.  He was an integral part of a regular season record of 19-1, and NLL championship.  In his two years of varsity basketball, Harding was part of an overall record of 35-6.

Harding was a member of the 1994 football team that ended up being NLL co-champions.  He helped anchor an offensive line that had two 1,000 yards rushers that season.  In the two years of varsity competition, Jim helped keep the ‘bell’ where it belongs by defeating Perrysburg High School.  That 1995 senior season concluded with Jim being named Second Team NLL, as well as an Honorable Mention All-Ohio selection.

Harding went on to play for coach Gary Pinkel at the University of Toledo, where he was a four-year starter at tackle.  Jim was a team captain and a first-team All-MAC selection as a senior in 2000.  He was part of three MAC West Division Championship teams in which he started 46 consecutive games (every game of his career) for the Rockets and blocked for UT’s all-time leading rusher Chester Taylor.  A UT Academic Honor Roll student in 1999 and 2000, Harding was awarded Academic All-MAC honors in 1998 and 1999. As a senior, he was co-winner of the Jim Nicholson Award, an award given to the team’s most valuable player. After graduation, Harding moved to the coaching ranks, serving first as a graduate assistant at the University of Missouri, then as the defensive coordinator and head coach at Troy (MI) Athens High School, then as the offensive line coach/co-offensive coordinator at the University of Wyoming.  Currently, Coach Harding is the co-offensive coordinator and the offensive line coach for the University of Utah.

Jim was inducted to the University of Toledo Athletic Hall of Fame in 2013. 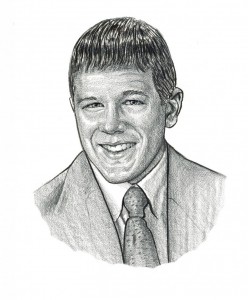 Lief D. Gilsdorf earned 4 varsity letters during his athletic career at Maumee High School from 1998-2002.  Many MHS sports fans may not think these honors would place Gilsdorf in the top tier of Panther alumni – – but it’s the dominating fashion in which Lief earned those letters that underscores his place alongside the great ones.

As a member of Coach Ken Walczak’s (MHS Hall of Fame ’10) squad, Gilsdorf followed in the footsteps of the great Maumee wrestlers that had come before him . . . Jeff Berry, Andy Horrigan, Brett Boggs, and Jeff Kern, among many others.  Teammate Jeremy Carpenter (MHS Hall of Fame ’15) bolstered an already-loaded roster during Gilsdorf’s junior and senior years.

Lief earned 3 Northern Lakes League championships from 1999-2002 and a runner-up finish as a freshman in 1998.  He placed first or second at the Sectional Championships in each of his four years at MHS.  As a freshman, he took third place in the Division II District Championships, earning a trip to Columbus as an OHSAA State Wrestling Championships qualifier.

Lief was honored as a 2x All-American by USA Wrestling, voted an All-Star by the Greater Toledo Wrestling Coaches Association each of his four years at Maumee and was also honored by the Toledo Blade, the Mirror, Channel 13ABC, Maumee Kiwanis and the Ohio House of Representatives.  He holds Maumee High School wrestling records in wins (126), most tournament wins (17), most consecutive wins (37), most matches without giving up a point (25) and best overall record in a season (37-1 in 2000-01).

After fulfilling his military service obligation, Lief accepted a position as the superintendent for Schindler Elevator Corporation’s Central New York district.  As one would expect, Gilsdorf has continued to excel in everything he takes on.  He is a 3-time Boston Marathon qualifier and as recently as 2014 won his age division in the Fort Lauderdale Marathon (5th place overall). 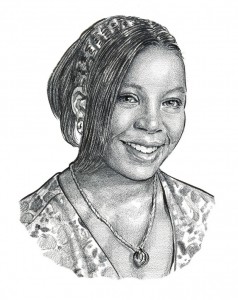 In track, Reva started off her high school career by breaking the school record in the 100m and garnering First Team All-NLL status at the league championships.  In addition, she was a member of the 4x100m and 4x200m relay teams that both won league championships in 2000.  As a sophomore, she returned to the podium in the 100m by earning Honorable Mention All-NLL.  Despite this success, Reva chose not to participate during her junior and senior years.

As a junior during the 2001-02 season, Reva led the league in scoring and was named First Team All-NLL, Second Team All-District and Honorable Mention All-Ohio in Division II.  She was also named Mirror Co-Player of the Year in the Northern Lakes League.

Coach Kalmbach leaned heavily on Kerkulah when she became a senior, and she responded to the pressure as he expected.  Reva led her team to a 4th straight Division II Sectional Championship and along the way etched her name into the MHS record books as the 3rd-leading scorer in MHS women’s basketball history – a record that still stands today.  She again earned honors in the NLL (First Team), District (First Team) and All-Ohio status (Second Team).  The District 7 Coaches’ Association voted Reva as the Player of the Year in 2003.  She was chosen to play in the Nancy Rehm Border Wars Ohio-Indiana All-Star Game after her senior year.

Reva began playing basketball in the fifth grade and owes much of her success to the worth ethic instilled by her father.  Once Reva showed her father she had an interest in basketball, he trained her on a day-to-day basis.  Everyday her father made a point of taking her to the gym to train.

Reva graduated in 2003 and went on to Tiffin University for one year.  She later attended the University of Toledo, graduating with a Bachelor’s Degree in Arts and Sciences and certification in Paralegal Studies.  She currently works for the U.S. Attorney’s Office, where she is part of the legal support team in the criminal division.  She earned the rank of Staff Sergeant with the Army National Guard in 2011. 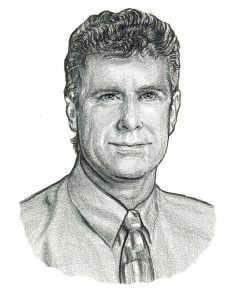 Coach John Boles arrived at Maumee High School in the summer of 1998 and spent the next fifteen years leading the Panther football program to unprecedented success.

Boles graduated from BGSU in 1976, where he earned All-MAC honors as a receiver and was named a First Team Academic All-American.

Prior to coaching at Maumee, John coached at Northwood High School for one year (7-3) and Genoa High School for twelve years.  While at GHS, his teams went 73-47 with four Suburban Lakes League titles.

Coach Boles was fond of saying that while his house was in Perrysburg, his “home was in Maumee”.  His teams won 86 games during his fifteen years at the helm, which ranks #1 all-time.  The Panthers qualified for the Division II state playoffs from 2001-2004.  He repeated this feat again with his 2009 and 2010 squads.  In addition, his 2001 and 2009 teams won Northern Lakes League regular-season championships.  During these fifteen years, MHS had the only three playoff wins in school history and hosted a home playoff game four times.  Boles coached six First Team All-Ohio players during that stretch.

He received the Golden Apple Award in 2011 as a Social Studies teacher and was instrumental in developing the curriculum for the Personal Wellness class that is currently offered at MHS, a class that combines physical training and character development.  He retired from the profession in 2012 but can still be seen at MHS games.

Today, he resides in Perrysburg with his wife, Kathi, and they have five children between them – Ryan and Samantha (John) and Jake, Jessie and Zac (Kathi).  They have three grandchildren – Isaac, Amelia and Emmerie.