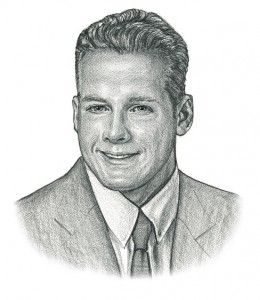 In football, David earned three varsity letters in the 10th, 11th, and 12th grades.  After his junior season, David’s defensive dominance earned him 2nd Team NLL All-League honors and 2nd Team NW District honors.  During that time, David played on both sides of the ball.  He demonstrated his almighty power at the fullback position by blocking for over 1,000 rushing plays during his junior and senior seasons.  When he wasn’t opening massive holes for rushing teammates, he was clogging running lanes as a middle linebacker on defense.

Not only did David excel on the gridiron, he also had an illustrious high school career on the baseball diamond.  His participation merited another three varsity letters in grades 10, 11 and 12.  David accumulated numerous post-season accolades.  After his junior year, he received 1st Team NLL All-League and 2nd Team NW District.  Following his senior year he acquired 1st Team NLL All-League, 1st Team NW District, and 1st Team All-Ohio.  At the plate, David was a force to be reckoned with.  His batting averages speak for themselves — .486 at the end of his junior season and .538 after his senior season, respectively.  Not only did he lead all of his Panther teammates each year, but he also finished with the 3rd highest batting average in the NLL at the end of his senior season.  To cap off his high school baseball career, David was selected to play in the Mizuno All-Star game at Ohio State University.  He seized the opportunity to showcase his talents.  David was 4 for 8 at the plate and was starting catcher during that contest.

David’s athletic supremacy landed him a baseball scholarship at Madonna University in Livonia, Michigan.  He earned a B.S. in Criminal Justice and is currently employed as a deputy sheriff with the Lucas County Sheriff’s Office. 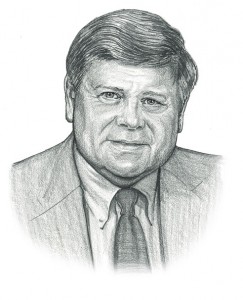 Robert Kristenak wore many hats around the halls of Maumee High School.  To his colleagues, he was an enthusiastic teacher, an established coach, and a respected Athletic Director. To his student athletes, he was a motivator, a role model, and a pioneer.

Clearly, Bob was a sports enthusiast.  He began his career in the Maumee City Schools in 1961 as a physical education teacher and a football coach.  Each fall, he lived for Friday night football games.  Bob whole-heartedly believed that extra-curricular activities could enrich every student’s high school experience.  He encouraged students to extend their school days in order to participate in sports and other activities.

Bob wanted kids to have opportunities to showcase their athletic talents.  So, in 1967, Bob started a cross-country program at the high school that he coached himself.  From 1968 through 1972, he guided his cross-country teams to 37 straight dual meet victories.  This inspired others to test their running prowess in a sport that still continues to thrive at MHS today.  During his thirteen years at the helm, the Panthers had a record of 80-29 with five NLL titles.  His 1969 team qualified for the OHSAA State Meet and finished 17th when there were only two classifications.

Coaching track and field also came naturally to Bob.  During his three seasons of coaching boys track, his teams finished as league champions twice and finished second the other year.  His charisma and rapport with members of his teams inspired them to perform to the best of their abilities.  They respected his leadership, his knowledge of the sport, and commitment to excellence.

In 1975, Bob accepted a new challenge—coaching girls.  The transition to girls cross country suited him just fine as the Lady Panthers finished at the top of the league with an NLL title.

It was fitting that Bob was most noted for his tenure as the Athletic Director.  He held that position for seventeen years during which he mentored other young coaches and supported young men and women in their athletic endeavors.  Robert Kristenak epitomized everything that Maumee High School stands for, enriching the lives of young people and preparing them to meet life-long challenges with grace and dignity.