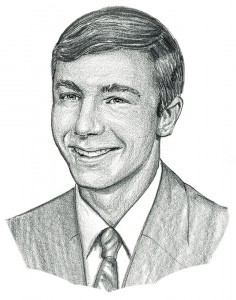 Through the years, certain remarkable people have walked the halls of Maumee High School.  One of these individuals graduated in 1970, and by many accounts his skill has yet to be matched.

Joe Berry achieved many athletic awards and distinctions during his four years at MHS, earning seven varsity letters in cross country, basketball and baseball.  A three-year varsity letter winner in basketball for Coach Bob Balogh, Joe earned First Team NLL his senior year and was named Player of the Week by the Toledo Times in January 1970.  That year, he led the Northern Lakes League in scoring at almost 24 points per game, no easy feat for the 5’ 7” floor general.  The high-jumping speedster also received the Toledo Blade athletic award for his success on the hardwood.

Basketball wasn’t his only sport – Joe also earned varsity accolades in cross country and also pitched and played centerfield for the baseball team during his freshman, sophomore and senior years.  Berry was more than just an athlete; he was involved in the Hi-Y Club and the Varsity Club during his MHS career, where he actively participated in several fundraisers for the Sunshine Children’s Home.

Today, Maumee’s “aggressive little spark plug”, as the media would refer to him, is a successful business owner in Maumee where he resides with his wife, Dianne.  He is a proud father to Jennifer, Andrea and Joe and grandfather to Brody. 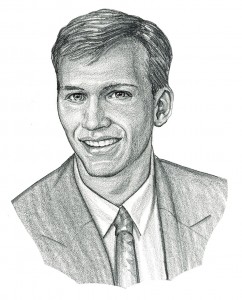 James D. Robinson, Jr. attended Maumee High School from 1991 to 1995 and was a fitting example of the label “student-athlete”.  Not only did Jim excel in both varsity basketball and football beginning his sophomore year, he also earned five varsity letters (three in basketball and two in football) and graduated with a 3.9 grade point average.

Jim was a highly decorated and well-known Maumee Panther, earning such awards as All-NLL, NLL Senior Academic and All-District, among others.  Robinson was a First Team NLL quarterback in 1994 and led his team to a 9-1 regular season record and a playoff berth in the OHSAA tournament.  In his final regular season game, Robinson scored the winning touchdown against rival Perrysburg.  In basketball, Jim was a three-year starting guard, two-year captain and will forever be remembered for “The Shot” – – a 3-point buzzer beater against none other than Perrysburg.  Jim’s athletic prowess and hard work in the classroom led to his being inducted into the National Football Foundation Hall of Fame in 1995, an honor that is shared by few other individuals.

Not content to just be an athlete, Robinson was also a member of the National Honor Society, Maumee Mayoral Advisory Council and was a D.A.R.E. role model.  Upon graduation from Maumee, Jim played one year of college football at Bowling Green State University where he earned his Bachelor’s Degree in 1999.  He later attended the University of Toledo and obtained his Master’s Degree in 2003.  Jim’s strong work ethic and dedication led to his being named Teacher of the Month in Wood County while teaching for the Eastwood Local Schools.  He also spent time coaching boys basketball at the middle school and varsity level for fifteen years. 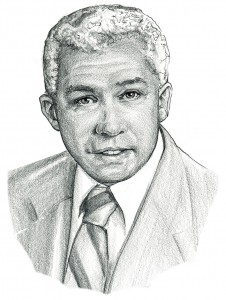 Teacher, coach, mentor, leader . . . all characteristics that describe Mr. Robert J. Tomasic.  Coach Tomasic’s teaching and coaching career began at Maumee High School in 1973, where he would go on to coach both boys’ track and girls’ cross country for the next twenty-six years.  Bob taught Occupational Work Adjustment, Health and Physical Education and was a three-time President of the MEA.  He diligently served two terms on the MEA negotiating team, was a member of two North Central Association Commission on Accreditation and School Improvement teams (NCA CASI) for Perrysburg and Rogers and was a very respected and loved figure to thousands of students, hundreds of student-athletes and numerous colleagues at Maumee High School.

The founder of the Maumee girls’ cross country program in the fall of 1974, Tomasic’s female harriers would go on to amass a record of 197-94 (.677).  Two of Bob’s most memorable teams were the 1981 and 1982 squads that won back-to-back NLL championships, with the ’81 team placing 12th at the OHSAA State Meet.  Five of his teams finished third or higher in the Northern Lakes League.

Coach Tomasic’s first season as the boys’ track coach, in 1974, saw the team win the first of his five NLL titles (1974, 1975, 1980, 1982, 1984).  For the next twenty-six years, Bob’s teams would break nearly every Maumee High School record and compile an overall record of 159-85 (.652).  Ten of his teams placed third or higher in the Northern Lakes League and over 100 athletes have been NLL champions with Robert Tomasic as their coach, including six current MHS Hall of Fame members.

The Maumee Invitational Relays, started by Tomasic himself, are still run today.  Bob was a loyal member of the OATCCC during his career, serving as the NW District rep for twelve years.  In addition, he served eight years on the Midwest Meet of Champions staff, two years as the Ohio coach for the event and five years on the scholarship committee for the OATCCC.

Today, Bob resides in Waterville, Ohio and Mesa, Arizona with his wife, Carole.  They are the proud parents of three children; Cheryl Freiberger, Diana Gable and Laura Anguiano.  In addition, they are grandparents to five: Kyle and Kelsey Gable, Isabella Anguiano and Katy and Ian Freiberger. 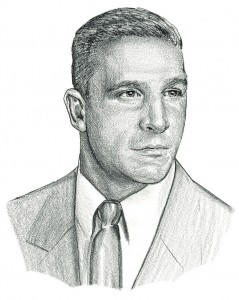 Gary Scott Wolf attended Maumee High School from 1988 to 1991.  Throughout his high school years, he played at a high level in the sports of football, wrestling and baseball, earning a total of seven varsity letters: three in football, two in wrestling and two in baseball.

Gary was an All-NLL selection in each of his three varsity football seasons; earning a spot on the Second Team as a sophomore linebacker, First Team as a junior nose tackle and First Team again as a senior playing defensive back.  In addition to his defensive awards, the versatile Wulf also received accolades on the offensive side of the ball, earning First Team All-NLL as a running back.  To close out his football career, Gary was recognized by the Northwest Ohio District coaches as a First Team NW District defensive back and by the media as a First Team All-Ohio selection at that same position.

In his two varsity seasons with the baseball team, Wulf earned a spot on the Second Team his junior year and on the First Team his senior year.  In just two years with the varsity Gary set three school records: innings pitched, strikeouts and homeruns.

Gary was named captain of both the football and baseball teams for his senior year and ended his career by receiving scholarship offers for both sports.  Ultimately, he accepted a baseball scholarship to Central Arizona College where he played for two years and was invited to try out for several MLB teams, including the Detroit Tigers and Cincinnati Reds.

Today, Gary resides in Maumee with his wife, Deirdre, and their four children (Nathan, Taylor, Kayla and Cody), all of whom are or will be attending his alma mater.  In addition to being a proud parent who is actively involved in his children’s lives, Gary has also found time to give back to the community by coaching Maumee Little League and Maumee Youth Football.